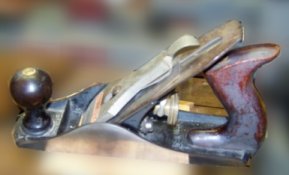 A couple of weeks ago, I decided on a whim to refurbish a couple of the tools I inherited from my father-in-law: A Block Plane and a Stanley #4 hand plane.  Both had really bad surface rust, and were REALLY cupped from years of heavy use.  To give you an idea of what I dealt with before, I used that #4 on a scrap piece of pine stock

Join me in this journey in the next couple of articles.

<rant>To tell you the truth, if these weren’t family heirlooms, I probably would have sold them and bought brand new Lie-Nielsen’s or something that was ready out of the box.  When taking my time into account, it would have been hard to justify doing this to every plane I come across that needs work.  The learning curve on the needed process wasn’t too bad, but this was incredibly time consuming. </rant>

Enough of that.  On to the project!  From doing some research, I made the following assumptions:

Having a membership over at Finewoodworking.com, I was able to find an article suggested by Matt Vanderlist, from Matt’s Basement Workshop titled “Handplane Tune-Up“.  It pretty much confirmed the above, but also added the following:

Note: Feel free to click on any of the smaller pictures to enlarge them (they’re thumbnails to conserve bandwidth)

A lot of people seem to go overboard (that’s not to say that I didn’t take it a little too far as well, but I had the paper laying around) and use 1000 grit and 8000 grit wet stones to finish out the job.  Why bother?  It seems that it’s more of an asthetics issue than accuracy at that point (hope you like how your wood substrate puts those scratches right back into the metal, too).  And if you want to argue accuracy, here’s proof positive we’re flat, as well as square to the sides using my shiney new “Guaranteed Accurate” (maximum deviation from nominal of less than 0.001″ at any point along the full length of the blade) Incra square:

I seriously doubt that any accuracy can be gained by polishing out any further (within my skill set anyway), and if you’re willing to whip out your electron microscope to prove me wrong, well, woodworking probably shouldn’t be a hobby of yours, stay away from me!

Keep in touch.  Next time, we’ll discuss truing up the frog using somewhat of a similar method.