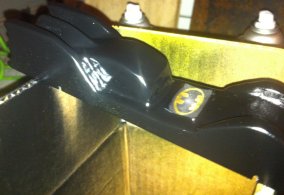 A few weeks ago, The Redneck Engineer gave me a phone call with a small project that had to be completed for his son: A Pinewood Derby car. To make things a little interesting, they had decided that it would be best served in the form of the Batmobile. I thought it was a great idea! Here’s a quick rundown of how we worked it out.

First, T.R.E. and Junior Redneck Engineer (J.R.E.) sketched out a multi-plane design with a rough idea of how they wanted it to look:

With an idea in mind, we headed over to the bandsaw and rough cut the edges of the design they sketched out.  A flat file was used to file out the saw marks left by the bandsaw so we had a good, even surface to start with.  After the file work was done, I thought that the best way to cut the rounded fins in the back would be on the router table.  I set up a core box bit (which, to date, I’ve only used to put grooves in trim) and made two easy passes for the fins.  Pine is a very workable, soft wood that doesn’t really give you any problems.  Just a little more file work to blend in the cuts on the router table, and we are left with this for a rough cut pinewood derby block:

Not bad for handwork and a Dremel tool, but T.R.E. and I both agree:  We would kill for a CNC wood mill for things like this!  One final thing we did before I turned T.R.E. and J.R.E. loose:  we polished the axles (err, nails rather) by chucking them up in the drill press.  The reason we ran the drill press is to avoid getting flat spots in the axles, because, well, a wheel that turns without issue is kind of the whole point.  It didn’t take much.  We just used a piece of 600 grit sandpaper to knock the burrs off and smooth the axle, and then burnished it to make it a little smoother with a piece of cardboard.  Here’s a nice close up of the polished axles: 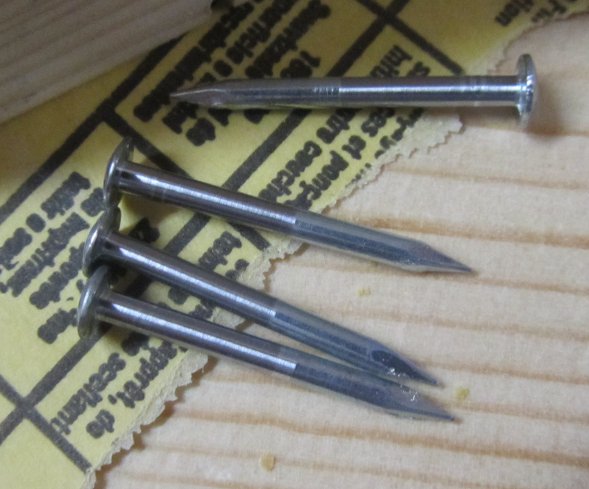 As you might imagine, the wheels spin MUCH smoother now!  After we roughed everything out and everyone returned home, the batmobile was painted a few days later, after some final sanding in some key spots we had missed.  The result looks absolutely incredible, and I hope you will agree: 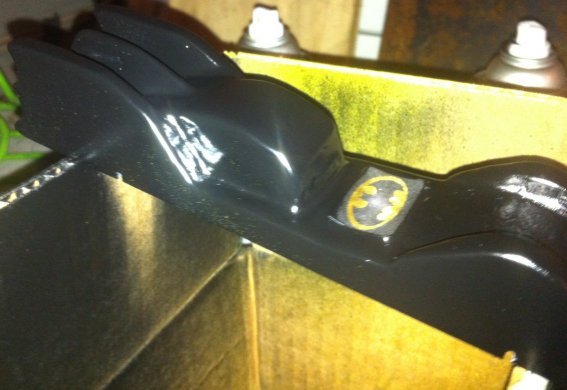 Well, see ya next time.  Things are settling down for me, and I should be blogging in more of a regular fashion now.  I don’t know if everyone is looking forward to that, or mumbling obscenities under their breath about a mans obsession over gas station hot dogs, but I tend to enjoy it!